The Bear Pit Theatre is a unique venue at the heart of the Stratford community providing a permanent home to amateur theatre-makers in the district, including the theatre’s own Bear Pit company. As Covid-19 troubled its finances and future, artistic director David Mears, chairman Simon Allen and finance director David Derrington spoke to Gill Sutherland about what the theatre means to the town.

How The Bear Pit Theatre began

David Mears: It was born out of the prospect of the civil hall closing around 2008, and possibly not having a community venue in the town. It had become increasingly difficult for groups to even hirer the civic hall [now the Play House] because the costs were so prohibitive.

Stratford Musical Theatre Company or the Orchestra of the Swan might have been able to fill it but most amateur companies would maybe sell 80 tickets a show, and it proved to be too expensive. If you wanted to do a smaller play there was simply nowhere to go.

Certainly all that spurred us on to get the Bear Pit established. Leamington had the Loft theatre, Kenilworth had two little theatres – but why on earth hadn’t the home of Shakespeare not got a little theatre? It didn’t make sense.

And at the time there were an awful lot of groups all trying to do their own thing – but not necessarily talking to each other. So it was about trying to bring them together and have better conversations as artists working together. Not just acting groups, but those that play instruments, love literature or make art.

The first thing we did ¬– in 2008 - was a showcase weekend, with an art exhibition, cabaret evening, sketch shows, dancing, and storytelling. We basically took over the civic hall and said this is what we’ve got to offer please make sure we have a venue to ensure this work can happen.

Simon Allen: It got to the point where potentially the civic hall could close so we started to look at the other venues. As I deal with commercial property, I was charged with looking for a new venue.

Richard Eggington of the town trust suggested the United Reform Church. Built in 1888, and funded by Fred Winter, the Victorian building used to host badminton and other Congregational church activities. When we saw it we just thought ‘wow’.

David M: It’s like walking into a Tardis, you go through the blue doors and you just see space after space. It very much looked like a badminton hall so it took quite a bit to hide it.

Simon: We began talking to Rev Graham Spicer, and it all seemed to go so well and were greatly helped by the town trust.

David M: From 2008 to our opening in 2012 there were an awful lot of fundraisers, including an evening with Alistair McGowan who donated his fee.

Simon: We are comfortable in there – we are very pleased with where we are we have a very good relationship with URC and extended the lease last year.

David Derrington: Our biggest investment was the lighting rig – £15k to do that; then the raked seating was the next big cost. Thankfully we were able to get new seats in 2016 replacing our old uncomfortable grey ones when the RSC were getting rid of theirs at the Courtyard [now TOP].

David M: We have just kept growing and growing and we are lucky to have get a town trust grant of around £26K to do the dressing rooms – which were the old kitchens – and add a storage room. We really prospered after that.

David D: We’ve always kept reserves for bad times. The last big cost was refurbishment of the bar, which was in place for The Norman Conquests a year ago. Of course it was a blow to have to then shut just after what had been a successful production.

Revenue from ticket sales is down by £50k and basically we were set to run out of money by next month. The directors have been putting hands in pocket to offer loans, but we can’t keep asking people to do that. So couple of weeks ago when we were at our beam ends, we thought we can pack it in or appeal for support on a fundraising page. The result has been quite extraordinary. The situation now is that we know we are solvent until at least Christmas. If we can open by then we can get the wheels rolling again and survive.

Our base costs are about £22K to £24K, which covers rent, rates and utility bills.

We’ve been donated about £7K on our fundraising page, and private donations – although some of that has been specifically given for productions.

What makes the Bear Pit unique?

David M: The intimacy – there is no other venue like it in town that has the same intimacy and flexibility to reconfigure the stage and seating. We seat 100, then there’s the 1,000-capacity RST, 420 Swan, The Attic 80 and Arts House 400.

David M: We want to continue to collaborate with our friends in the church and the community and to make it an arts hub.

It is at its most buzzing during something like the literary festival, when both spaces are being used – a 100 watching a talk in the theatre and then 150 doing a workshop in the church.

Success of the theatre company

As the RSC’s Gregory Doran says, 80 per cent of a successful show is down to casting and we’re tremendously lucky to have a great ensemble of actors who will jump from one production to another, and bringing in new people is also a part of that.

I love the fact that the audience is so close to the stage – everyone has a great view no matter where they are sitting. It’s very much a shared ‘we are all in it together’ experience. And it’s that which we are so desparately missing at the moment. In terms of own lives but in the world of the arts to be able to connect with what’s happening onstage and the people around you is something very powerful and necessary. There are some sad stories of people really missing that connection - 100 per cent it has had an impact on mental health

David M: With social distance in place until autumn we will have to see, but a perfect project would be Peter Morgan’s The Audience, which centres on the Queen and her meetings with ministers. We could do Zoom rehearsals until such time as we can get back up and reconnect with the theatre space.

David D: We hope to be back and we can keep going until then but the key message is that we are an integral part of the community and welcome everyone’s support.

To contribute to the 'Play Your Part' fundraising drive visit www.justgiving.com and search for Bear Pit Theatre before it ends on 14th March.

What the community says

The most memorable moment was probably the first production of Dad's Army, which was performed in the church. This was the moment when we realised how good Bear Pit is as a theatre company, how hard they work to get everything just right and how well we could work together with cooperation and understanding from both parties.

One of the most important aspects of having the Bear Pit in our premises is the way that it has enabled co-operation and teamworking. Our regular liaison meetings are a pleasure rather than a ‘task’.

Volunteers from the URC and BP are able to work together in harmony, enjoying each other's company and appreciating each other’s views. Theatre goers are often surprised that they can enjoy their interval drinks inside the church – it’s another way of showing that church members are ‘regular’ normal people.

Live theatre is a hugely important part of our heritage and it mustn't be allowed to wither because of the pandemic.

One day all this will be over, and we will need places like the Bear Pit to remind us that life is to be enjoyed and celebrated to the full.

The Bear Pit works well for children’s theatre and some of the performances Riverside Theatre has put on there work really well and looked gorgeous.

It forms an important part of our festival venue offering in an easily accessible place We are dominated by a theatre of the international standing of the RSC but a town need a community theatre with a broader offering.

The Phoenix Players love using the Bear Pit theatre. Its intimate space suits our audiences and the players always comment on how at home they feel when we perform there.

Particular highlights have been performing Wyrd Sisters at the Bear Pit when we managed to sell out, a joy for any small theatre group. Then there was also A Phoenix Night, our variety show, when we managed to get around 30 cast members on-stage, and the Farndale Ladies Murder Mystery, many laughs from the word go.

The venue has been an important part of keeping the Phoenix Players alive and kicking and allowing other groups to flourish. As audience numbers have reduced in recent years, being able to hire a smaller venue has meant our shows are still financially viable.

In2Theatre is the Stratford-upon-Avon company for adults with learning difficulties,

stages, we think of the Bear Pit Theatre as our home.

Small and simple as it is, the black box form of the Bear Pit focusses on the actors and allows quieter voices to carry, the intimate gesture to have impact, the smallest expression to be seen.

The actors are quickly aware of the audience response, they feel it, see it and hear it and as their confidence grows so do the individual performances lifting them beyond anything achieved in rehearsal.

For me the highlight of our run has to be the Relaxed Performance when our company of learning disabled actors perform to audience of their friends and members of the local disabled community. It is not large, overwhelming and impersonal but familiar like a school hall, here they can feel comfortable. Suddenly the actors on stage are performing to their peers as if saying “look what we can do, great isn’t it! We are brilliant, and so are you.”

The Bear Pit Theatre is an asset to local community theatre, being a space which is a good size for a local group, with good facilities at a reasonable price – there are simply not enough such venues. Having a team of technical members who are familiar with the venue means that we can have the space for a week to rehearse and perform with minimum intervention needed by hall management.

We’ve presented a wide range of work and they have all had their special moments. For me as a director, A Midsummer Night’s Dream and the opportunity to present it in the round was a highlight. 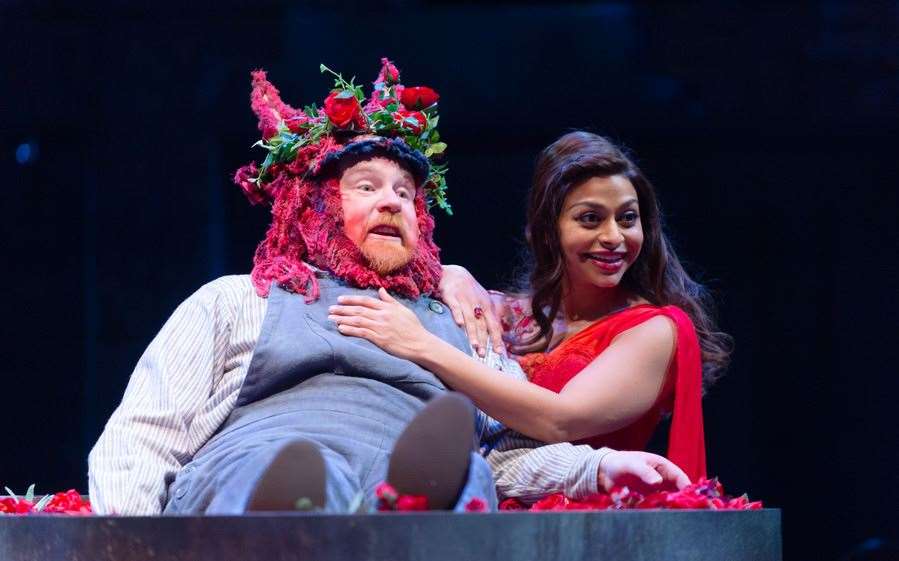 11. Not forgetting A Midsummer Night's Dream, when Bear Pit Theatre Company actors performed with the RSC in 2016.