Raising a glass to the WI and Mrs Guinness 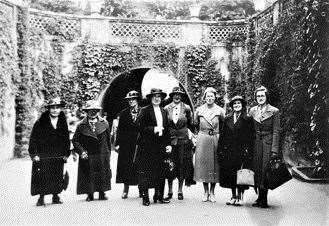 That milestone was celebrated by the current members of the group with a champagne reception followed by dinner in the Oak Room at Wootton Hall – the very building where the groundwork for the village’s WI was carried out.

The group’s history starts in 1921, when Mrs Guinness invited her friends to meet at her home, Wootton Hall, with a view to forming a Women’s Institute in the village, which happened the following year.

Initial meetings of the newly-formed WI took place in The Mill next to the River Alne, which was part of the Guinness estate, bought by Robert Guinness in 1912.

After the Second World War a prefabricated green tin hut was erected on land opposite the Bull’s Head pub, and this served as the village hall and the WI’s home until the current village hall building was completed in 1971.

All past WI presidents for Wootton Wawen are named on boards in this hall alongside celebratory collages illustrating national and community events over the decades.

Back in the day, the first meetings were held in the afternoon enabling ladies to be home in time to have tea on the table and everyone walked or cycled to the meetings. The early committees sat at a trestle table to conduct the business part of the meeting with some knitting throughout proceedings so as not to waste time. Since its establishment, approximately 4,000 WI members have contributed tirelessly to the village, supporting projects which have been recorded in detailed scrapbooks held in the archive centre within Wootton Hall.

The centenary was a chance to reminisce about the WI’s impact as well as the chance to look forward to the year ahead when there will be plenty of events to mark the 100 years of serving the community in Wootton Wawen.

Diane Buckley, who is the 30th president of Wootton Wawen WI, said: “I think we have done very well to get to our 100th anniversary and we’ve had 4,000 members during that time, some of whom have been in the WI for 50 years.

“It’s very enjoyable to be celebrating our centenary because unfortunately some WIs haven’t continued.

“We have been planning for a couple of years by using the history and archive of the group, which is nice, and will help show its longevity. We are a friendly bunch and we are very keen to get involved in the community.”

Forthcoming events planned by the WI include an archive exhibition at Wootton Hall from Saturday 2nd April, planters around the village with purple, green and white flowers throughout the year, a village picnic and free music on 3rd June as part of the Queen’s Platinum Jubilee celebrations, and a visit to Middleton Hall and gardens for glass workshop to design and make a bespoke memento platter for their centenary and individual items for members.